One of the most powerful graphics cards you can buy is AMD’s RX 6900 XT, easily capable of handling anything the latest top games can throw at it – and it’s sure to be able to play the biggest releases for the next few years. Whether it’s smooth 4K gaming or ultra-competitive frame rates for those critical FPS battles, the card will handle it all.

But in order for your PC to handle the graphics card, you’re going to need a power supply that can handle it. A graphics card this good needs an equally good power supply to keep it running. Find out just how much power the card needs, and what power supply you should buy, with this guide.

That tends to happen when you’re playing games on max settings, or if you use it to create any animations or edit videos – anything where it has to render detailed graphics.

A graphics card isn’t like your processor or RAM, which are heavily involved in everything you do with a PC. At times your graphics card will be considered ‘idle’, where it isn’t doing a lot. It’ll be providing the image on your monitors, but not a lot else.

During these times, the power consumption drops drastically to around 20 watts. This is still pretty high compared to other graphics cards which often consume 10 or fewer watts, but it’s considerably less than it uses while you’re actually putting it through its paces (source).

When looking at power consumption from an energy use perspective, it’s good to convert it to kilowatt-hours since that’s what our electricity is billed by. And because the average cost of a kilowatt-hour of electricity in the US is $0.14, we can work out that an RX 6900 XT uses around $0.35 per week.

But that’s only for those 8.5 hours spent gaming per week. If you also use your PC for other tasks, like work or just browsing the internet, then you can expect to add a couple of cents onto that to account for the time it spends idle.

And you also need to remember that this is only the graphics card, which is just one component in your PC. Everything else – the motherboard, the processor, your storage, your RAM – these all need their own power to work.

The graphics card will always be the biggest power draw, often at around twice the rest of the components of the PC combined. But if you’re approaching this from the angle of understanding how much your PC is costing you to run, you can’t just base it on the graphics card’s power consumption.

Read more: How many watts does a Gaming PC use?

The RX 6900 XT is the more powerful version of the RX 6800 XT. Released a month later, it was intended to be the flagship card, while the 6800 XT was a step down in terms of ability and cost. The 6900 XT uses more power on average but has lower wattage spikes.

Here’s how the two cards compare:

The recommended power supply for an RX 6900 XT is 850 watts, according to the manufacturer AMD. That may seem high for a graphics card that uses 300 watts on average, but it gives plenty of leeway for spikes and overclocking.

Firstly, remember that the power supply does the job of providing power to all parts of your PC, not just the graphics card. So it needs to have a high enough capacity to be able to power everything.

And once you’ve added together the power requirements for all your PC’s components, you’ll then need to add on an extra 20%, to account for spikes. These spikes can happen at any time, and while they may only last a few milliseconds, if they exceed your PSU’s capacity they can overload it and cause your whole PC to restart.

It’s unlikely you’ll be pairing an RX 6900 XT with a low-spec PC because no matter how good the graphics card is, it needs the support of a top processor and enough RAM to run games. So for that reason, using an 850-watt power supply definitely makes sense – it’ll have no trouble running a high-end PC.

The best power supply for an RX 6900 XT would be one that has a minimum power capacity of 850 watts. You should look for one from a known manufacturer, ideally fully modular, with an efficiency rating of 80+ Gold or better. 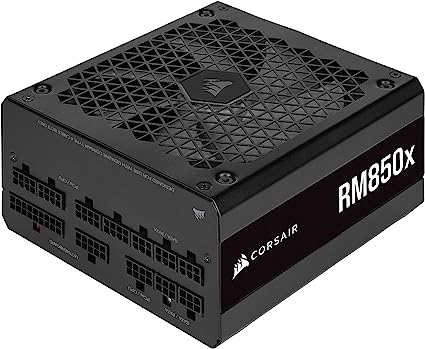 Corsair are one of the best manufacturers of power supplies (among other PC components), and this Corsair PSU ticks all the other boxes as well. It’s an 850-watt option and it’s 80+ Gold, which means it’s efficient when drawing power from the mains.

And because it’s fully modular, you can make your whole PC more efficient, since there will be fewer cables inside the PC blocking airflow.

Most RX 6900 XT graphics cards have three PCIe connectors, and you should connect all three to the power supply using separate cables. A single cable can transfer 150 watts of power, so three are needed to handle the spikes of the card.

Some people prefer to use either two 8-pin cables, one of which may split in two to connect to two ports. But that won’t deliver sufficient power. It might work, but don’t be surprised if the graphics card struggles when under duress.

A 750-watt power supply may be enough for an RX 6900 XT if you pair it with a low- to mid-spec PC and don’t play the latest games on the highest settings. But it’s recommended to have one with at least 850 watts capacity.

An 850-watt power supply should be sufficient for an RX 6900 XT, even when paired with other high-spec components. If you have the budget then you might want to stretch to a 1,000-watt PSU but only to future-proof against upgrades you make in the coming years.

Hi! I'm Adam and I'll be bringing you useful advice to help you use less energy so you can save money and our planet.

Read more about me.